It was over before it began. Almost. To be accurate, it was over six hours after it began. On the bright side, I’ve hiked 1% of the Mountain-to-Sea Trail. On the indifferent side, there is a high likelihood that I will never hike the other 99%.

On Sunday, my mom drove me two hours down to the Outer Banks of North Carolina. At Jockey’s Ridge State Park, we walked together up Jockey’s Ridge, which is the highest dune system on the east coast. At a hundred feet high, it pales in comparison to what can be found at Great Sand Dunes National Park in Colorado, but it’s sizable nonetheless. Incidentally, it’s also the eastern terminus of the Mountain-to-Sea Trail. 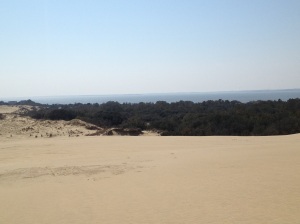 The view from the dune revealed a large body of water on the other side of the trees that had lined the road below. After the circuitous climb, my mom drove me across the street to the beach so that I didn’t have to walk across the multi-lane road, took a couple of pictures, and tearily bid me farewell.

I began walking with the ocean to my left and an expansive beach in front of me, the sand running into the distance and converging at a point beyond where I could see. As I eagerly walked toward that imaginary point, I passed myriad summer homes, hotels, and an occasional pier. I even saw several houses on stilts, condemned by damage from a recent hurricane. The water lapped the foot of their ghost-like facades as I cautiously walked below them.

A mile or so in, I spotted a pier and assumed that I would approach it imminently. An hour later, I still had not reached the landmark and wondered at how the landscape had played tricks on my perception.

I finally made it to the pier and took a break below it to take advantage of the shade. Although the temperature was only in the mid-40s, I had already sweated through my clothes as the sun beat down unforgivingly.

I briefly looked up and was taken with the beauty of the crashing waves. While walking, I’d had my eyes down or focused a few feet in front of me and had even zoned out to the white noise produced by the shifting tides. As I paused to take in the infinite horizon, I remembered that I love to sit and watch the waves, not rush by them in a blur.

Six miles later, as I made it to the first road crossing, I questioned myself to no end. My feet hurt from walking on sand; I  still had three miles to go to my planned destination; and a park ranger told me that that nearest campsite was closed through next week, which shook my confidence.

What was I doing there? Why did I think I would enjoy hiking all alone on a virtually unknown trail with limited resources and support? I thought it would clear my mind?

For the first time since I threw a hissy fit at the age of seven over continuing to take piano lessons, I quit. I called my mom as I walked along the road, telling her I was OK but hoping she would convince me to give up since I’m usually too stubborn to do it of my own volition.

By the time I made it to the Bodie Island Lighthouse, it was all over. I sat on the curb, staring at the lighthouse. The fading light painted the distant sky in soft pastel hues. I waited as my mom, relieved, drove another two hours to pick me up, transforming her Sunday into an eight hour road trip. 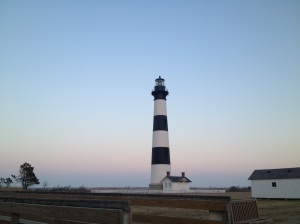 Having set out to achieve a goal, I met with utter failure. I wish that I were embarrassed with myself. The potential for embarrassment would at least motivate me to continue on toward my goal. However, these days I’m loathe to feel such strong motivating forces, even negative ones. I feel like I have the A.T. to blame for such apathy.

When I decided to hike the A.T., I felt anticipation, enthusiasm, focus, purpose. During my thru-hike, I interpreted every challenge through the lens of those emotions. Even when I finished and decided to write a book, I approached the process with a similar mindset.

Now, with my manuscript nominally finished and a year separating me from the beginning of my A.T. thru-hike, I’ve felt the need to rediscover that sense of purpose. I guess that’s what the Mountain-to-Sea Trail was, grasping for purpose. I thought that if the A.T. could provide me that, another trail would be able to do the same. But it isn’t the same. And I’m not the same. Now I have a frame of reference for all of the discomfort, loneliness, and constant uncertainty. I didn’t realize it until I spent Sunday hiking along the beach, but as life-altering as it was the first time around, I’m not sure I’ll ever want to relive the experience. I definitely don’t want to right now.

My entire life I’ve striven to achieve ever greater goals. A perfect example is running. When I first started running, one mile turned into three miles turned into six miles turned into a half marathon. Mind you that I then burdened my knee with an overuse injury that lingered for a year.

In any case, I’m not very good at moderation, nor at setting smaller goals; maybe that’s why I set my sights on the Mountain-to-Sea. Maybe, too, that’s why I buckled after the first day. Perhaps my brain was telling me to set smaller goals, to stop and watch the waves crashing on the shore for a change.

The more I mull it over, the more that I think my brain was right. It might be time to ratchet it back, to leave the heavy pack at home, to set more modest goals. I might need to regain my sense of purpose in the work that I do and bring my outdoor adventures back into the realm of strictly pleasure. It’s a hard transition to make after an experience as intense as an A.T. thru-hike, but my (very short thru-) hike (attempt) this weekend has shown me that I need to re-frame my relationship with the great outdoors.

Hopefully, next time I’ll have exciting news to share about a successful day-hike instead of a failed thru-hike.